You are here: Home / Photography / What is a RAW file?

Although these images are collectively known as “RAW” images, the file extension is very rarely .raw. Each camera manufacturer applies their own file extension (that’s the letters at the end of the file) and they can sometimes even differ from camera to camera.

For instance, Nikon’s RAW files carry the extension .NEF while Canon’s RAW files are .CR2 files. These are both examples of RAW image formats. 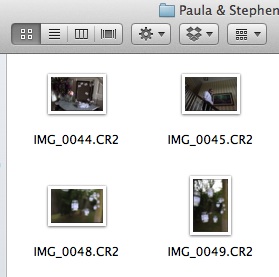 These .cr2 files are RAW files from my Canon 5D Mark II.

There are few discussions that divide photographers like the RAW vs JPEG argument. Photographers of different camps swear by both types, and the discussion of which is better is really beyond thes cope of this article. (I’ll probably cover this later)

For now, just focus on knowing that RAW images aren’t as good straight out of camera as JPEG, but can really shine with editing. RAW files are larger but contain more data as a result. RAW holds more potential, but has to be processed by software such as… Adobe Lightroom for using presets.